Welcome to the official website of the gaslamp fantasy series The Zoltan Chronicles. A relativity new series with a rapidly growing fan-base the story begins with The Blue Haired Girl. The book follows the epic journey of Anni, the blue-haired slave who travels across the magical land of Decariea in an epic struggle to bring freedom to a world in chains.

Born into slavery, much of Anni's past is shrouded in mystery, a distant blur like a dream just barely forgotten. But there is also something unique about Anni, which sets her apart from everyone she ever knew. A secret locked deep in the past that she cannot remember for there is something truly strange about the blue-haired girl.

Check it Out on Amazon

What is Gaslamp Fantasy?

Gaslamp fantasy (also known as gaslight fantasy or gaslight romance) is a subgenre of both fantasy and historical fiction. Generally speaking, this particular realm of fantasy employs either a Victorian or Edwardian setting. The gaslamp fantasy genre is not to be confused with steampunk, which usually has more of a super-science edge. Gaslamp fantasy differs from classical Victorian/Edwardian faerie or pure fantasy in the J.R.R. Tolkien or Lewis Carroll style or from historical crime-novels in the Anne Perry or June Thomson form by the supernatural elements, themes, and subjects it features. Many of its tropes, ideas, and stock characters derive from Gothic literature—a long-established genre composed of both romantic and horrific traits and motivated by the desire to rouse fear, apprehension, and other intense emotions within the reader—and could be described as an attempt to modernize literary Gothicism. (Gaslamp Fantasy, 2009. Gaslamp Fantasy. Retrieved 3 May 2020, from https://en.wikipedia.org/wiki/Gaslamp_fantasy)


In other words, technological development found in the worlds of Gaslamp fantasy dates from the early to late 1800s. The Zoltan Chronicles is no exception as well; however, as in our society, the gaslamp fantasy world of Decariea does not have its technology distributed equally. Just as in our world when Great Brittan was building factories, canals, and eventually, railways, Russia was still practicing serfdom and industrialization came to them very late. 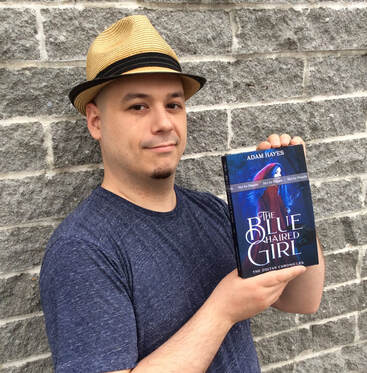 Gaslamp Fantasy Author Adam Hayes was born in Duncan, British Columbia, about an hour north of Victoria. He has always been a massive fan of high and gaslamp fantasy books. Ever since childhood, Adam has loved reading and writing young adult fantasy books. His favorites are the fantasy classics: Lord of the Rings, Narnia, The Hobbit, and of course, Harry Potter, which he maintains are the best fantasy books of all time.

Adam is a cancer survivor and came up with the idea for The Blue Haired Girl while in the hospital receiving chemotherapy for Hodgkin's Lymphoma. During one exceptionally long treatment secession, he decided to use the opportunity to follow his dream and begin writing a fantasy series. Thus, the gaslamp fantasy books, The Zoltan Chronicles were born.

On behalf of Adam and everyone here at thezoltanchronicles.com, we would like to thank you all for your support. Thanks to readers like you, we can make The Zoltan Chronicles one of the top dark fantasy books around. Please take a minute to check out our books while you're here or swing by our blog to stay up to date with upcoming new book releases. Also, please check out our Facebook and Twitter pages as well, we love hearing from our fans.

How can I learn more?

By far, the best way to learn about a genre is to read them. While gaslamp fantasy is a more obscure branch of the science fiction/fantasy, it has a cult following (think steampunk style).

But if your not sure if the gaslamp fantasy genre is for you then, please, fill out of the form below, and you can read the first chapter of the Blue Haired Girl absolutely free. We will never sell or disseminate your email to anyone, and you can unsubscribe at any time.

Want to read the first chapter for free? Enter your info below: